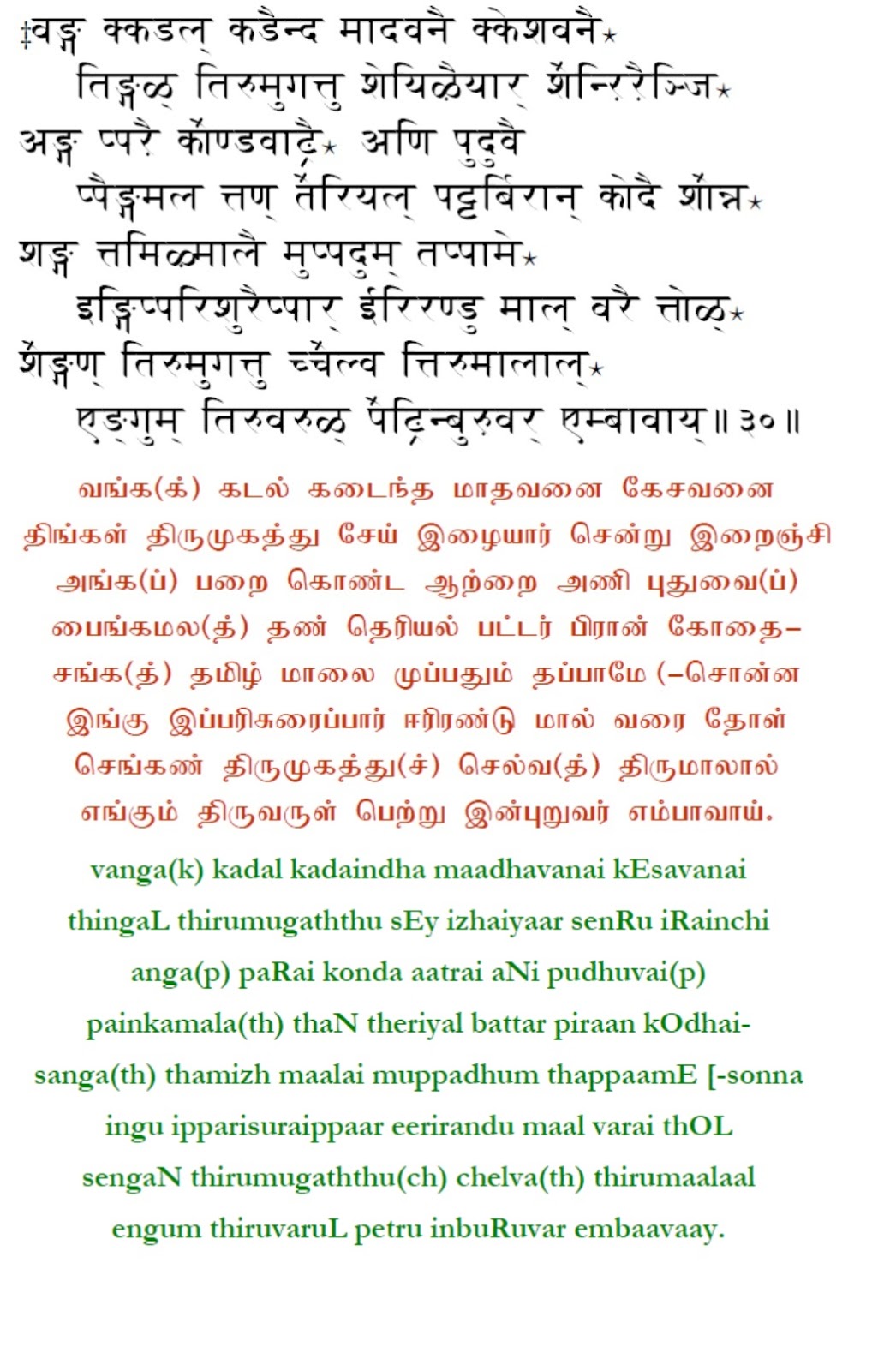 The last pasuram is the phalashruthi. Nachiar says that Perumal became Madhavan by churning the milky ocean as He obtained “Maa” goddess Lakshmi as His wife. He became the husband of “Maa” and hence came to be called as “Madhavan”. As a bonus for obtaining Goddess Sri Devi as His wife, He also obtained the 5 lakh gopi girls. Nachiar says that He churned “Vanga Kadal”. In this pasuram, Vangam does not refer to Bay of Bengal. In Tamil, Vangam means ship. Therefore Perumal churned that ocean which is abode to a ship. A ship is a mode of transport used by people to cross the ocean. Perumal is the ship on which we cross the huge ocean of samsara to reach Sri Vaikuntham. Hence the ocean abode to the ship called Narayana is the milky ocean.
After obtaining Piratti as His wife, Perumal also obtained a son and a grandson. Perumal obtained Lord Brahma as his son and Lord Siva as His grandson. Thus Perumal came to be called as Keshavan. The meaning of the name “Keshavan” is explained by Lord Siva in Harivamsam as, “Ka + Isan”. Ka is the name for Brahma and Isan is the name for Siva. Thus Keshavan is the origin for both Brahma as well as Siva. This explanation was also used by Adi Sankaracharyar in his Vishnu Sahasranamam commentaries.
Like Perumal who obtained a wife, son and grandson, anyone who chants this Thirupavai Prabandham will also be blessed with a long line of progeny.
The girls approached Perumal by wearing beautiful jewellery which suited their appearance. The girls had beautiful pleasant face which was akin to the face of both Thayar and moon. Moon is the brother of Piratti as both of them came from the milky ocean when it was churned. Thayar resides on red lotus and she always closes the door to her abode when the moon rises. Sita Piratti did not have any brothers and the brothers of Rukmini Piratti antagonized Perumal. Thus by mentioning “moon” with Piratti, Nachiar is fulfilling Perumal’s wish to have a brother-in-law.
Anyone who chants this Prabandham will obtain anything they wished for. The gopi girls got Lord Krishna, Gokulam was blessed with rain, and jeevatma got Paramatma. Like this anything which is wished by the people who chant this Prabandham will be fulfilled. The fruits obtained by chanting the Prabandham are confirmed by Kothai Nachiar. Perumal pays heed to the words of Nachiar. At Tirumala during Tirumanjanam, Ubhaya Nachiars are not near Perumal. As Perumal cannot bear to be away from Nachiar for even a few minutes, He requests the Bhattacharyas to chant Nachiar Thirumozhi during Tirumanjanam. Lord Srinivasa wears the garland sent to Tirumala from Sri Villiputhur which was worn by Nachiar. Lord Srinivasa wears this garland before proceeding on His yanai vahanam during the Brahmotsavam.
Nachiar identifies herself as the daughter of Periazhwar called as Bhattar Piran in order to establish her Acharya Sambhandham. She describes Bhattar Piran as always wearing fresh lotus garland (teriyal). The flowers do not wilt because Periazhwar has a cool heart. He wears garland to decorate the antaryami and not for his own enjoyment. She further says that she is the daughter of the Bhattar Piran of sri Villiputhur to show us that Sri Villiputhur is the crown jewel of this world.
Nachiar asks us to chant the musical garland she has presented us with in the form of Thirupavai by not leaving out even one pasuram. By singing this Prabandham regularly (or at least the first 3 pasuram along with last 4 or just chitram siru kalai pasuram) we will get the blessing of Sriyapathi. Even if Perumal refuses to grant us our wishes, Thirupavai will make Him grant our wishes. We will then continue to live happily in this world itself like the athmas living in Sri Vaikuntham.
After completing Thirupavai as well as Nachiar Thirumozhi, Andal Nachiar requested Periazhwar to invite the Perumals of various Divya desam to take part in her swayamvaram so that she could choose one of them as her husband. To this day this event is celebrated as a Utsavam in Sri Villiputhur; as it would be difficult to arrange for all 106 Perumals in the Utsavam, the following 5 Perumals take part; Srinivasa from Tirumala, Azhagar, Vatapatra Sayee from Sri Villiputhur, Ranganathan from Sri Rangam and Thiruthangalappan from Thiruthangal.

As Periazhwar introduced Nachiar to each of the 106 Divya Desam Perumals, she refused to marry all except Lord Ranganathan. She refused to go as a bride to Badrikashram because it is very cold there, she said Naimisharanyam was a forest, Ahobillam was very difficult to reach, lord Srinivasan had not recovered from His debt incurred during His previous wedding to Padmavathi Thayar, Thiruvidanthai Perumal spent all of the 365 days getting married, Thiruvallikeni Parthasarathy Perumal had a moustache and will not be a suitable son in law for the orthodox Periazhwar. Thus Nachiar selected lord Ranganathan as her husband.
Nachiar solved our regret, Parvati Devi’s regret and Garudazhwar’s regret through her incarnation. We have already seen how she solved our regret and Parvati Devi’s regret. We will now examine how she solved Garudazhwar’s regret.
Garudazhwar felt bad that Perumal and Piratti always assigned Him a separate sanctum while they kept his junior lord hanuman with them in their sanctum. Piratti replied that since Lord Hanuman had brought Perumal and Piratti together during Ramavataram he enjoyed this special privilege.
Garudazhwar wanted to have a similar opportunity so that he too can stay with them inside their sanctum.
Andal Nachiar promised that if Garudazhwar brought Lord Ranganathan from Sri Rangam on time to the wedding hall without causing any delay, she would allow Garudazhwar to stay with them inside the temple.

Garudazhwar went to Sri Rangam but it was not an easy task to make Lord Ranganathan leave on time as Perumal wouldn’t part company with His mirror! Perumal wanted to make sure that He looked good and as a result wouldn’t move away from the mirror. As it was well past the time to leave, Garudazhwar had to carry Perumal forcibly to Sri Villiputhur. They arrived at Sri Villiputhur with minutes to spare but Perumal wouldn’t disembark as He was fixing His hair. Garudazhwar forcibly disembarked Perumal inside the wedding hall on time. As a result of this Perumal’s ankle was injured and to this day, Lord Rangamannar posture indicates His injured ankle. As Garudazhwar kept his promise and brought Perumal on time to the wedding hall, Nachiar assigned a place inside their sanctum for Garudazhwar. To this day, we can see Garudazhwar standing next to Perumal and Nachiar at Sri Villiputhur.
Continued On: http://thoughtsonsanathanadharma.blogspot.ca/2013/02/thirupavai-summary.html

Posted by Swetha Sundaram at 18:17

Please visit the facebook page of Krishna The Butter Bandit